ÓSCAR GARCÍA MARINA IS A COOK WHO IS PERMANETLY EVOLUTIONING. HE STARTED IS CAREER IN THE RESTAURANT ALVARGONZÁLEZ, IN IS HOME TOWN VINUESA, WHERE HE WORKED FOR ELEVEN YEARS. IN 2008 HE AND HIS TEAM DECIDED TO START THEIR OWN PATH AND THAT IS HOW BALUARTE OPENED IN SORIA.

Since then, he has received many recognitions for his work such as “Best chef in Castilla y León 2013”, a “Sol of Repsol’s Guide”, etc. He has also been included among the best 20 young cooks of Spain and he had an article published in the Spanish newspaper “Expansión” among others.

His career as head of Baluarte has been built from patience, reflexion, investigation and constant advance. This chef from Soria perfectly knows how to transfer nature’s soul into the dish. He is famous because of his work with mushrooms, fungus and black truffle from Soria. And he has also participated in many conventions and conferences about mycology. He has contributed to this field thanks to his new techniques and ways of cooking, being constantly looking for excellence in the mycological gastronomy.

He is well-known because of the quality of the products, the harmony of the dishes and the combination of modern cooking with tradition. He never forgets where he comes from and he does know where he heads; he heads for a natural cooking where plain flavours, excellence, surprise and emotions are the main ingredients. Therefore Óscar García incorporates innovation to the menu, the conferences, the dishes, etc. All of them include the principal raw materials such as olive oil elaborated by Baluarte or the vegetable products from our own ecological patch.

In November 2016 we received the first Michelin star at the gala held at Mas Marroch (Girona). 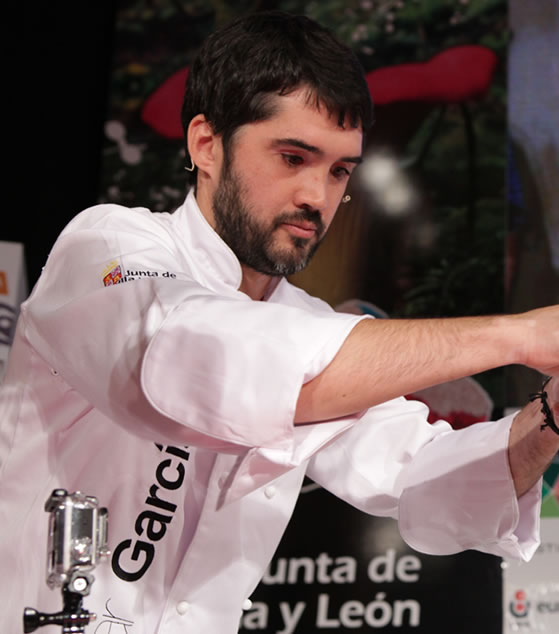 Validation error occured. Please enter the fields and submit it again.
Thank You ! Your email has been delivered.